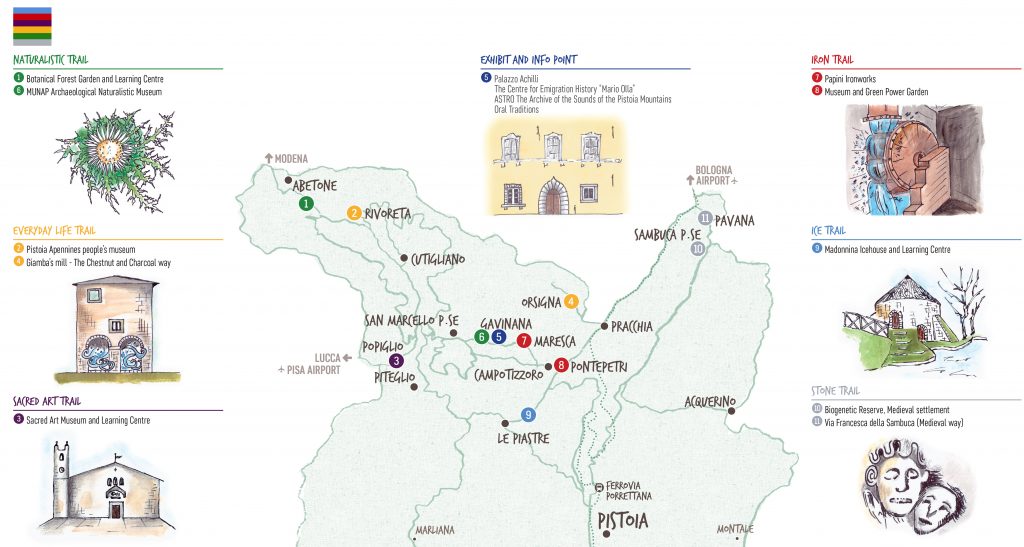 Established by the Provincial Government of Pistoia and inaugurated in 1990, the Ecomuseo della Montagna Pistoiese was the first Ecomuseum in Italy; an innovative project, which received a Targa d’Oro award in Parma as the best example of Apennine region enhancement.
Over twenty years it has been developed and extended, reaching a form which is almost final; since November 2011 it is being managed by the Association Ecomuseo della Montagna Pistoiese, based in Gavinana, inside the historical Palazzo Achilli.

In 2015 it was accredited as regional relevance Ecomuseum by the Tuscan Regional Government (Decree no. 3949 of 02/09/2015); every year it has more than 11,000 visitors – school parties, groups and individuals; since 2019 the Ecomuseo is lead manager of SIMOP – Sistema Museale Montagna Pistoiese (the Montagna Pistoiese Museum System).

The Ecomuseo accompanies you at a leisurely pace to discover testimonies and traditions, telling about centuries of human history and work in the Montagna Pistoiese region, where specific environmental and historical factors have affected the economy and culture of its inhabitants.
Ironworks, water mills, ice-houses and an extraordinary naturalistic heritage are waiting for you, to engage you in an authentic vintage dimension, on a continuous journey between present and past.

We use cookies on our website to give you the most relevant experience by remembering your preferences and repeat visits. By clicking “Accept”, you consent to the use of ALL the cookies. Leggi di più
Cookie settingsACCEPT
Manage consent

This website uses cookies to improve your experience while you navigate through the website. Out of these, the cookies that are categorized as necessary are stored on your browser as they are essential for the working of basic functionalities of the website. We also use third-party cookies that help us analyze and understand how you use this website. These cookies will be stored in your browser only with your consent. You also have the option to opt-out of these cookies. But opting out of some of these cookies may affect your browsing experience.
Necessary Always Enabled

Any cookies that may not be particularly necessary for the website to function and is used specifically to collect user personal data via analytics, ads, other embedded contents are termed as non-necessary cookies. It is mandatory to procure user consent prior to running these cookies on your website.